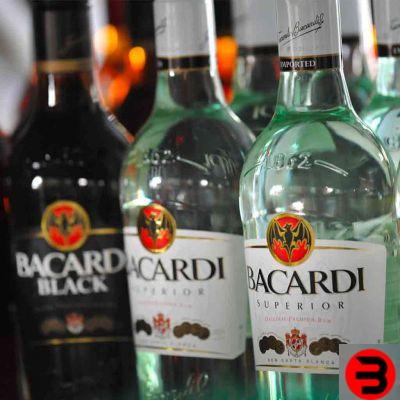 Bacardi is synonymous only with Bacardi. No distillate in the world has managed to create a category of its own like this rum di origine cubana. The reasons that have allowed Bacardi to become an icon in the world of spirits are many and embrace historical and cultural events ranging from the mid-800th century to that of the 900th century. Bacardi's story begins in 1830, in the thriving Catalan community of the city of Santiago de Cuba.

At the beginning of the nineteenth century, the four Bacardi brothers left Sitges, a small town in Catalonia, arriving in Santiago de Cuba. Don Facundo Bacardi, who would become the founder of the Bacardi Distillery, was also accompanied by a group of friends always originally from Sitges, who would change the history of Caribbean rum: in fact, in addition to him, the trio was made up of Evaristo Alvarez, founder of Matusalem also in Cuba and Adres Brugal, who created Ron Brugal after moving to the Dominican Republic.

Facundo Bacardi he found in the new country a production of very low quality aguardiente, the result of the work of small improvised distillers who produced a sour and almost undrinkable spirit, if not diluted with coffee or fruit juices. On the other hand, the raw material namely Cuban sugar cane was of the highest quality with particularly high levels of sucrose, resulting in a rich fermentation that produced potentially high quality distillates.

The story of Bacardi: Facundo Bacardi in Cuba

Arrived in Cuba Don Facundo Bacardi Massó, originally from Spain and therefore with a wealth of knowledge related to the world of Sherry and Brandy, found himself in an environment dominated by the backwardness of production systems, which was common to most of the Caribbean countries colonized by the Spaniards due to the Royal ban on production. or export distilled beverages to protect Spain's wine and brandy industry.

The Spanish emperor Charles II banned the production of rum in the overseas colonies in an edict dated 8 June 1693, which was later revoked in 1788 while maintaining restrictions on the amount of rum that could be imported into Spain. In the mid-800th century, however, conditions changed and Cuba was preparing to become one of the main sugar producers in the Caribbean, supplanting one of the main competitors, namely Haiti, where the revolution had just ended and the other French and English Caribbean colonies. in which - unlike Cuba - slavery had been abolished.


Bacardi found himself in ideal conditions to develop his project of distilling a rum from sugar cane molasses, following the work begun in the English colonies as in Barbados, in which the distillation of molasses had already begun in the mid-700th century. Molasses is a by-product of sugar refining that was initially simply discarded at the end of production. Going against the tradition of Spanish and Portuguese winemakers who as early as the XNUMXth began to produce aguardiente cane juice to be added to fortified wines such as sherry, port and Madeira to make them resistant to ocean crossings, Bacardi chose to distill molasses as the production process turned out to be cheaper and more controllable.

In the meantime, the Spanish government's reluctance towards rum was also falling, so much so that in the mid-800th century a competition was held to produce a light rum to "satisfy the taste of the court and the elite of the Spanish empire".

The secrets of Facundo Bacardi's production

This was the environment in which Facundo Bacardi began his research which lasted for ten years - from 1852 to 1862 approximately - to develop a high quality light rum. The innovations introduced by Bacardi to achieve a result completely different from the rums on the market and which then decreed its worldwide success, are many and all aimed at creating a more rounded and enjoyable distillate than the competition.


First, Bacardi was able to isolate a strain of yeast from the roots of the sugar cane plants growing in Cuba with the perfect characteristics to achieve the aroma and taste profile he was looking for. The reserves of this specific yeast is that the Levadura Bacardi (Bacardi yeast) is kept under strict control at the company's distilleries in Puerto Rico and Mexico, the only two distilleries where rum is currently produced.

Yeast tends to change over time, but the company employs a number of sophisticated techniques to ensure that each batch of yeast used is identical to the "main strain" originally isolated from Facundo Bacardi. Bacardi considers his proprietary yeast strain so valuable that when the Cuban government seized the Bacardi distillery on October 14, 1960, it found that the company had killed the yeast stock at its factory to make sure it didn't fall into the hands of the Castro government.

Fortunately, for drinkers of rum, samples of Levadura Bacardi they were already available at the company's Puerto Rican and Mexican distilleries. A second innovation was the use of coal filtration. The charcoal consisted of a combination of tropical woods and coconut shells. Charcoal began to be used as a filtering agent in the bleaching of sugar in the early XNUMXth century by British chemists and Facundo Bacardi was the first to explore its use for filtering distillates, reaffirming his abilities as an innovator.

The combination of material used in the production of Bacardi charcoal is also a closely kept secret, the combinations of tropical woods and coconut shells used being not known, but the result of Bacardi charcoal was and is that it not only absorbs the contaminants that conferred rum had a sour taste, but it discolored it, giving it a clear appearance. Bacardi's third innovation was that of distill in two stages, each with a different alcohol content and congeners (the organic molecules that give rum their aroma and gustatory profile).

The two distillates were then blended together to create an aromatic profile consistent with the lightness sought by Bacardi. In this process it was negotiated to apply the traditional Spanish brandy distillation technique to rum, so Bacardi did nothing but apply his knowledge acquired in Spain. The latest innovation was to introduce the aging of rum in oak barrels in Cuba, after the process had already been used for the aging of rum in Jamaica and in Barbados, as well as in the aging of cognac and whiskey. The combination of all these new techniques, some revolutionary, others borrowed from the tradition of distillation, gave Bacardi rum a unique appearance, aroma and profile.

This style of rum was called light Cuban rum and has become the best-selling style of rum in the world. Over the last century, Bacardi has further refined the process and greatly expanded the size of its production, but fundamentally still produces rum as Don Facundo Bacardi did in the XNUMXth century.

The success of Ron Bacardi

For much of his history Bacardi rum was the world's largest producer of rum and by far the best known rum brand in the world, earning over 550 international awards (more than any other rum brand) for the quality and innovative marketing of its rums. What not many know is that from the very beginning Bacardi aimed beyond the pleasantness of its rum, also on marketing strategies.

The famous symbol that heads on all Bacardi bottles, that is the bat, represents the first marketing activity of the company. It was chosen by Doña Amalia, wife of the founder Don Facundo Bacardi, when she saw a group of bats nesting in the gutter of the distillery and adopted because bats are the symbol of luck in Spain but also in Cuba. Despite being an element linked to superstition, Bacardi also sensed its promotional potential: in fact many customers (at the time semi-illiterate) began asking for "bat rum" that they saw engraved on the rum barrels.

When Bacardi also began to bottle his own rum, each label represented the Bacardi bat and was signed by Don Facundo to guarantee the quality of the rum. Subsequently, the marketing of the company was strongly linked to the world of cocktails which was establishing itself towards the end of the 800th century. The flavor of Bacardi rum so soft and light was ideal for mixing with fruits, drinks and syrups. Lots of rum cocktails more famous, such as the Daiquiri and Cuba Libre they were created with Bacardi rum, up to the very famous cocktail that took the name of the company and then the Bacardi Cocktail elaborated as a variation of the Daiquiri and became part of the unforgettable rum cocktails of the IBA.

The spread of Bacardi Rum in cocktails served to introduce rum into the American market, which continued to appreciate it even in the period of prohibition in the States during which nearby Cuba was a very popular holiday destination. The decision to move much of the production to Castaño in Puerto Rico in 1936 to pay less taxes on the export of Bacardi rum to the United States proved to be the company's salvation, when in 1960 the Fidel Castrò revolution led to the confiscation of all the country's distilleries.

After almost 160 years of history and 8 generations of Bacardi, the company is still fully in the hands of the family and currently at the head of the company there is still a Bacardi named Facundo. The company operates in 160 countries and has 30 production plants, while all rum production is in its distilleries in Cataño, Puerto Rico (the largest distillery in the world that has become a popular tourist destination) and the remainder in Tultitlan, City of Mexico. It has also maintained an office that can also be visited in Sitges, the very city of Catalonia from which Don Facundo Bacardi departed.

To reaffirm its strong link with the world of mixology and therefore the world of cocktails, annually Bacardi organizes the Bacardi Legacy competition worldwide, to reward the best unreleased cocktail. Bacardi's intent is to find a cocktail that is capable of becoming immortal like the Mojito, the Daiquiri or the Old Cuban, that is, those cocktails that have made the history of Cuba and Bacardi.

The competition starts from the regional and national stages and then culminates in a global selection that awards the prize to the best cocktail created with Bacardi rum. To participate, you just need to be a professional bartender and work in a bar that uses Bacardi rum. The cocktail recipe must be naturally rum based and include one of the following products as the dominant ingredient: Bacardi Carta Blanca Rum, Bacardi Carta Oro Rum, Bacardi Añejo Cuatro Rum or Bacardi Reserva Ocho Rum. To find out how to participate in the competition you can find all the information and the rules here.

Bacardi currently produces nine types of rum, ranging from classic Bacardi White Paper, ideal for i cocktails ai rum premium, up to the limited edition represented by the exclusive Bacardi Heritage rum. The latest addition to the Bacardi rum family is the Oakheart Rum which is part of the spiced rums, very popular in recent years.

There are various web shops where buy Bacardi Rum, but we recommend doing it on Amazon. Fast shipping, guaranteed and above all you will never risk losing your money. Payments are always insured and if you do register with Amazon Prime, you can receive this excellent product directly at your home Rum at the best price on the web without unnecessary shipping costs.