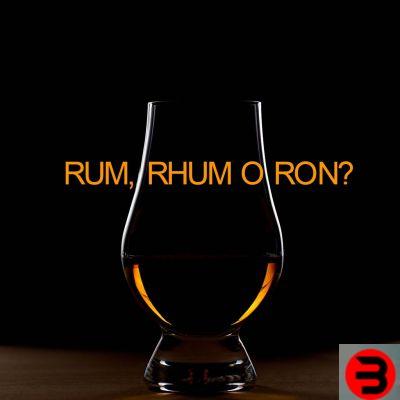 Rum, Rhum or Ron? What is the correct name?

Let's make it clear: Rum, Rhum or Ron are the same distillate sugar cane, called in three different ways based on the culture of the country of origin and the processing method. The word Rum indicates a distillate of Anglo-Saxon origin, ron of Spanish origin and rum of French origin. We are talking about origin and not of provenance because most of the rum, rhum o ron it is produced in former British, French and Spanish colonies, where the three countries imported the different distillation technologies used in their countries.

We can however affirm that rum is the original term, coined by the British, who first began to produce it in their colonies to give it to the sailors of the Royal Navy, ron and rhum are adaptations of the name in Spanish and French. The origins of the name rum are much more mysterious and there is no single school of thought on the subject, but more all plausible ideas, which we list below:

Rummage, from the English name of the hold of the ship where the distillate was kept;

Brum, as an ancient alcoholic beverage from Malaysia also described by Marco Polo, drunk by the Dutch during their expeditions;

Rummer, from the name of the glass always used by the Dutch when they arrived in Barbados, the island where the first distillery was founded in 1703;

Rumeny, the sweet wine for the English, who classified this distillate in this way;

Saccaharum, the rum abbreviation of the term used in Latin to indicate sugar.

Rumbullion, term used by the English to indicate a great party, mentioned in an official Barbados document dated 1651 as the name of a kill-devil drink;

Certainly contemporary rum is very different from the Rumbullion drunk by the first settlers and sailors of the Royal Navy. Often in those years they preferred to lengthen it with water, sugar and lime (almost a daiquiri) to make it more drinkable and limit the terrible hangover it could cause.

What is different about rum from rum and ron?

Rum is, as mentioned, the distillate of English origin produced with Pot Still or Coffey Still stills, originally used for whiskey.

The basis of production is sugar cane molasses and not cane juice and fermentation usually takes place with mother yeast. It is a method used in many of the countries colonized by the United Kingdom, including in Southeast Asia and Australia.

Also from the United Kingdom come the categories of Rum Cask or Single Barrel, that is, coming from a single barrel and Rum Full Proof, which does not require dilution with water.

Does rum differ from rum and ron?

The rum indicates the French origin of the distillate, in this case yes it uses the juice of the cane and not of the molasses. The stills are the same that are used for Armagnac and Cognac. The raw material is more noble (the more expensive cane juice) but the fermentation in case it is spontaneous is very difficult to regulate, being very fast.

Controlled fermentation methods are also used, which transform the virgin juice into a more stable sugar syrup, and then proceed with the introduction of the yeasts. The rum produced with these methods, characterized by high quality levels, can be called "Rhum Agricole”, That is rum obtained from the juice of the cane and which is faithful to the disciplinary adopted by the AOC (Appellation d'Origine Contrôlée - Denomination of Controlled Origin) to certify its origin.

In Spanish and Cuban ron: comparison with rum and rhum

The Spanish style is identified with the term ron and is normally used in Cuba, that is, in the country that is considered the symbolic place of the distillate. In this case the stills used are those used in Spain for the production of brandy. Ron is often a hybrid of rum and rum production methods, in fact, it can be the result of the distillation of molasses as well as cane juice and since there are no precise regulations, distilleries often use both methods without indicating it on the label.

It is also a widely used practice in Venezuela, the land of Diplomatic rum, which uses American oak barrels for aging like other cellars of ron. Many distilleries producing rum they also use the typical “Solera” aging process originating from Jerez in Spain, which involves dynamic aging, the result of continuous mixing between the different vintages of rum produced.

Where to buy rum, rum and ron

There are various web shops where buy Rum, but we recommend doing it on Amazon. Fast shipping, guaranteed and above all you will never risk losing your money. Payments are always insured and if you do register with Amazon Prime, you can receive this directly at your home Rum at the best price on the web and especially without unnecessary shipping costs.

add a comment of Correct name of the rum