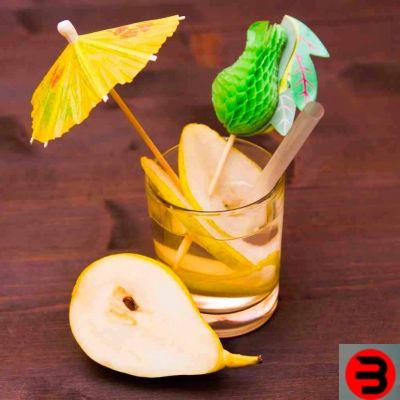 Rum and pear it is part of those fruit rum cocktails born in the 700th century to make a distillate more easily drinkable that at the time was very difficult to drink straight. The taste of combining rum and pear it has continued to this day - even if today rums are much softer - thanks to the characteristics of the only two ingredients that make up this simple cocktail: in fact, rum and pear seem to be born to be combined! Of course, having only two elements available to compose the rum and pear cocktail, we must carefully choose the rum among the many that the market offers and the pear juice, paying attention to the quality and concentration of fruit.

For rum, personal tastes come into play, linked to flavor, gradation and chromatic aspect, to its color. For a softer flavor, our advice is to turn to a Cuban rum or to a Venezuelan rum like the Pampero. If you prefer more intense flavors you will have to turn to Jamaican rum or compose your rum and pear with agricultural rum of Martinique. Finally, for those with more eccentric tastes, the recommended rum could be a spiced rum like rum Kraken, which will also give your rum and pear its classic dark color. The choice is not really lacking in terms of rum, as well as the chromatic choices: for your rum and pear you can choose from an infinite number of dark rums or choose a classic white rum like Bacardi Carta Blanca. As for pear juice, there are several good quality products on the market with generous concentrations of fruit. Usually only a little citric acid is added to the pear as an antioxidant and therefore they are usually healthy products.

The rum and pear cocktail it has imposed itself for its ease of execution and for the perfect balance between the two elements which must however be carefully dosed to enhance the flavors. For a classic rum and pear, 30% rum and 70% pear juice are usually recommended as doses. This is the formula for making a balanced and not too alcoholic rum and pear.

The proportions may vary depending on the alcohol content of rum and of the type: if you use a soft and sweet rum, such as rum Don Papa 7 years, you can also create a rum and pear cocktail with 40% rum and about 60% pear juice. If, on the other hand, you use a more structured rum, such as Diplomatic Reserva Exclusive, that is a rum aged 12 years with a more complex flavor, our advice is to stick to the initial formulation and that is 30% rum and 70% pear. The preparation, which can be done with or without ice, also affects the composition of the rum and pear cocktail. In fact, ice tends to flatten the flavor of rum and therefore in a rum and pear with ice you can also exceed the dose of rum, without unbalancing the flavor.

As already mentioned, there are many variations of the classic pear rum cocktail, here we propose a very interesting spiced version. The drink is a fantastic mix of fresh and natural flavors. The rum with which to compose it is a spiced rum, it could be the Kraken or a Sailor Jerry and to add an even more spicy note, the ideal ingredient is a little ginger juice. To prepare it you need:

Pour the ingredients into an ice-filled shaker and shake well, strain over ice into a Collins glass and finally garnish with half a slice of pear and a sprinkle of nutmeg.

A rum and pear punch it is another variation of the original cocktail and makes this version of the pairing closer to the original preparations, in which fresh fruit was used. It involves combining the liquid part consisting of rum, prosecco and ice with a puree of pears.

Ingredients and preparation of pear puree.

Three medium ripe pears, peeled and chopped; ¾ cup of water; ¼ cup of sugar. To make the pear puree: combine the chopped pears, water and sugar in a medium saucepan; bring to the boil. Reduce the heat and simmer until the pears are soft, it will take about 5 minutes. Blend until the mixture is smooth and let it rest in the fridge for a couple of hours.

1 750 ml bottle of fresh Prosecco; ½ cup of dark rum; 4 cups of ice. To make the punch: Combine the pear puree, prosecco and rum in a pitcher. Add ice and garnish with pear slices and finally serve with ice.

The chupito, a term that in Spanish means "blow", is the traditional small glass containing a spirit that must be drunk in one gulp, and which in Italy is better known by the name of “cicchetto”. In particular the chupito rum and pear, which is probably the most popular variant in the world, involves the consumption of one shot of white rum, dry and not aged to be ingested "by the drop", followed by a shot containing pear juice.

Origin of the Chupito

The birth of the chupito is traced back to the saloons and old cantinas where the custom was to serve spirits in small shot glasses, due to the high alcohol content of the drinks. The quantity of liquor ingested through these small glasses was contained but, to produce a strong effect anyway, the custom was to drink it all in one gulp.

The distillates were usually rather raw and therefore not very refined, bordering on toxicity, with a taste that was not always pleasant and therefore gulping down the content of the chupito allowed only the heat induced by the alcohol to be perceived rather than its real taste. The content present in these glasses could vary from 3 cl of rum, up to a maximum of 6 cl.

To prepare rum and pear you must use a variety of dry rum, white or at most amber, which has not undergone aging processes.
In this way you can count on a strong and very bitter drink, which must be sweetened by the thick taste of pear juice.

There are two categories of drinkers rum e pera; those who prefer to drink the liqueur first and then the pear juice, keeping the two liquids separate, or those who are used to mixing them in a single shot. The more experienced drinkers generally prefer to drink the two cicchetti separately, pouring them directly into the mouth in such a way as to bring down the rum (bitter) first and then the pear juice (sweet).

Using this method, you are able to savor the best organoleptic characteristics, first causing a very strong sensation of burning bitterness and then a more balanced perception of sweetness and density that manages to neutralize the (almost) pain caused by spirits.