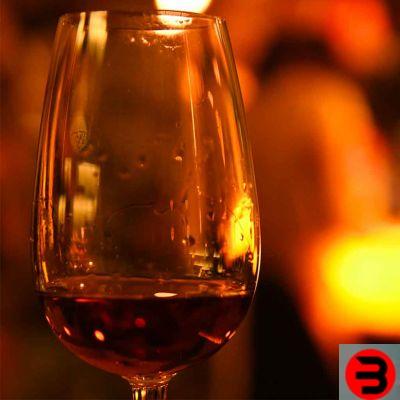 Dark rum it is a distillate of molasses or sugar cane juice aged in barrels, usually oak or oak. The distillate is originally white and will become dark thanks to the contact with the wood that hosts it during therum aging. So dark rum is synonymous with aged rum, but a white, light rum does not necessarily have to be aged. In fact, after aging the rum can change from dark to light color through filtration with charcoal, a method introduced by Bacardi and strongly diffused in Cuba and Puerto Rico.

If light rum is associated with light rum ideal for cocktails, dark rum is usually considered a more structured rum, to be tasted also alone or with ice. There are many factors that determine the color of dark rum: the porosity of the wood of the barrels; the size of the barrels; the years of aging; the dilution it will undergo after aging; the addition of dyes such as caramel, the addition of spices as in the case of spiced rums. So we absolutely cannot say with certainty that darker rum is an older rum, because many factors affect its color. Suffice it to say that "barrel proof" rum - that is rum with its natural alcohol content after its aging - can reach 80-90% alcohol, while most rums on the market are around 40-45% alcohol.

This is because - almost always - the dark rum at the exit from the barrels will be diluted with water to make it more easily drinkable and therefore will undergo a natural discoloration. The addition of caramel also strongly affects the dark color of the rum as well as its sweetness. It is a very convenient practice to give rum a dark color and a semblance of aging, but it is considered not very correct and especially by true rum enthusiasts, a real alteration of the distillate.

The originality and distinction of the Black Rum it is to be found substantially in its ingredients. This comes from the pure juice that is extracted from sugar cane or molasses. Among the best dark rums in the world we surely find you Eldorado, capable of releasing a wide variety of aromas with a strong and decisive taste, produced in the Guyana Region where there is indeed an important assortment of sugar cane. It has an alcohol content of 43% Vol. And has a 70 cl bottle format.

Undoubtedly among the best Rums also present in Italy there is the "Zacapa Rum“, Produced in Guatemala. It has a 70 cl bottle format and the alcoholic intensity ratio is around 45% Vol. Its peculiarity consists in the fact that before being available for its tasting it is aged, for long periods, in barrels. of Cognac.


Then we find another important brand that characterizes the dark rum family, in fact, how to forget about 15 year old rum? One of the 4 most sought after dark rums in the world. It has a bright color as is its alcohol content of 41,9% Vol. Product deriving from Guadeloupe, an area famous for having various types of cane sugar available.

The difference between dark rum and light rum it is only chromatic, it is not a symptom of aging or quality. It can be said that dark rum has aged, while light rum has not aged only in countries such as Jamaica, where spirits are traditionally also bottled without passing them into cask. Instead, there are rums that despite being aged are not dark but white, transparent.

In addition to the Cuban school, begun by Bacardi with his famous Bacardi Carta Blanca, there are also other aged rums with a transparent color: these are white agricultural rums, which are aged in stainless steel tanks that do not give color to the distillate. In this case, according to the AOC disciplinary for agricultural rum of Martinique (Appelation d'igine controlèe), aging must last for a minimum of three months. These rums are considered of excellent quality and appreciated by experts even if they are not dark, as they are not dark, but the white Cuban rons are very valuable. So we can say that the difference between dark rum and light rum is related to the appearance, but not necessarily to the quality of the rum.

If it does not undergo a discoloration process, barrel aged rum is dark. The discovery of the virtues of barrel aging and therefore the creation of dark rum is quite recent, if we think that the origini del rum they are dated around 1650. In fact, only in 1920 J. Bally, a French engineer who had recently opened his distillery in Martinique, began to age rum giving it its characteristic dark color. The French origins suggested him the opportunity to age rum following the process of the great cognacs of his land.

Of course, this process did not become famous only because it made the rum dark, but above all because thanks to the iterations between rum and the environment it improved the characteristics of the distillate. Still today, J. Bally's dark rums of excellent quality / price ratio are in production, such as rum J.Bally 7 years old. That of the French engineer was a real revolution for a distillate that at that time was considered of poor quality and right from that moment many of the dark rums considered to be of a higher level come from Martinique.

Il dark Caribbean rum it is a rum that has as its characteristic the production and aging in the former English, French and Spanish colonies such as Cuba, Jamaica, Barbados, Guyana. The three different origins have generated completely different schools of distillation and aging. A true Caribbean dark rum must still be aged in the same country in which it is distilled, a factor that will determine - due to the climate and humidity - greater evaporation than rums distilled in the Caribbean and aged in Europe.

There is also a specification to which many Caribbean distilleries have adhered which serves to establish the characteristics of the “Authentic Caribbean rums”: made with sugar cane juice or molasses of native origin; aged in oak barrels; without the addition of additives except for small quantities of caramel for coloring. The spiced dark rum instead it is a rum to which spices are added that will give their color to the distillate.

These are rums that can be made at home, also starting from a white rum, or industrially produced as in the case of rum Kraken which owes its dark, almost black appearance to the use of spices. The dark agricultural rum more famous and appreciated is that of Martinique, which is divided into different categories by the denomination of controlled origin in force, according to its aging. Finally, The dark rum overproof it is a rum with a strong alcohol content which due to its modest or no dilution subsequent to aging in cask, is characterized by particularly marked olfactory notes and on the palate.

Brands of dark rum most famous are those of the Cuban dark rum and in particular Bacardi (although currently rum is no longer produced in Cuba, but in the Dominican Republic) and Havana Club. They are products of the Spanish school, then aged in barrels of different vintages and then assembled with the method Solera. It is light rum, without particularly strong notes, but easy to drink or to use in cocktails.

For brands of dark rum of the English school, we turn to the rum from Jamaica, a rum known for being rich in esters (substances that give it its characteristic fascinating flavor) and with a strong alcohol content. With these brands of rum there is a tendency to be used above all in cocktails, since they are distillates with very pronounced olfactory notes and on the palate. Finally, the most prestigious brands of dark rum of the French school come from Martinique. In this case, in addition to the rum brand, it will be necessary to verify the age of the distillate which is certified by the AOC to understand whether it is tasting rum (the older ones) or cocktail rums (the younger ones). However, these are brands of dark rum that due to their high cost are usually tasted alone or at most with ice.

Generally the rum associated with the art of mixology is the light one, but many of the cocktails that are part of the most prestigious list, that of the IBA (International Bartender Association) are cocktails made with dark rum such as the Mai Thai and zombie. In other cases it is also possible to make classics such as Mojito, Cuba Libre and many other cocktails with dark rum, which gives it greater personality and a flavor more akin to rum lovers.

Among the types of dark rum for cocktails the most popular are the Cuban rum, with Bacardi and Havana Club in the front row and the Jamaican one, used mainly in dark rum-based cocktails with a stronger alcohol content. However, there is no doubt that dark rum is suitable for cocktails, especially fruit-based ones, in which the sweet taste risks overwhelming that of the distillate.

Where to buy dark rum

Today, thanks to the web, we can find the best Rums available on the market. In particular, the online platform always proves to be the simplest and fastest way to buy at the best price. On the web we can easily find all the useful information to evaluate the quality, price and reviews of the product. Obviously in this case it will be possible to analyze the different types of Black Rum, based not only on their origin of origin but also on the various types of ingredients present on the product sheet.

There are various web shops where buy Rum at the best price, but we recommend doing it on Amazon. Fast shipping, guaranteed and above all you will never risk losing your money. Payments are always insured and if you do register with Amazon Prime, you can receive the Dark rum at the best price on the web without unnecessary shipping costs.