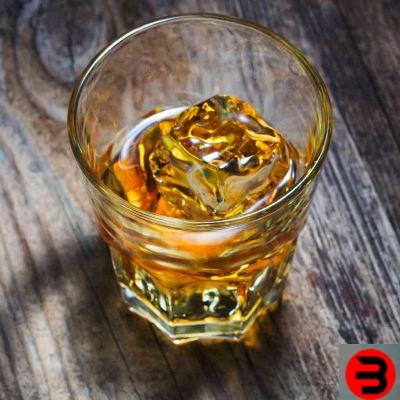 Agitated not stirred. This is the famous phrase that Sean Connery utters as James Bond in Ian Fleming's “License to Kill”. This is also the main doubt it concerns the use of ice together with rum, which is mainly linked to their combination in cocktails.

Many do not know that this phrase "Agitated not stirred" - referring to a Vodka Martini Cocktail and one of the most famous in the history of cinema - contains an error: according to the classic school of bartenders it is a cocktail that absolutely must not be stirred but mixed gently, to ensure that vodka and gin do not dilute and that they do not lose their transparency.

This is a rule that also belongs topairing of rum with ice in cocktails: the cocktail consisting mainly of rum and other spirits must be mixed, in order not to dilute the flavor (for example Long Island Iced Tea), as opposed to that which contains fruit (for example Barracuda), which must be shaken.

Maybe we know why old James said his famous "Shake Not Stirred" for his Cocktail Martini: he wanted to gulp it in a second! In fact, diluting and cooling distillates has the only positive aspect to increase their drinkability.

Generally those who love quality rum, so-called premium or super premium rums, consider the combination with ice a real blasphemy. The fact remains that simpler and cheaper rums, to drink in more relaxed situations, can - especially in summer - combine with ice. Of course, the quality of the ice becomes fundamental, which depends on the fridge or the ice maker that produces it.

Ice, considered by many to be a real ingredient, should be transparent, but this not for an exclusively aesthetic reason, but because transparent ice is dense and melts much more slowly by not diluting the distillate. But what makes ice transparent and better for hers pairing with rum? The reason is to be found in the slowness with which the ice is formed, which ensures that the air does not get trapped inside, creating microscopic bubbles.

The best ice makers simulate the process that occurs for example in the formation of natural icicles that form in winter, creating transparent ice. Therefore, to create transparent and therefore denser ice at home, you can introduce a cooler bag in the freezer that slows down the formation of cubes, inside which the ice molds.

To understand if we have made ice for the rum at the cocktail bar level, we must place a couple of cubes for a few seconds on the palm of the hand, after which it should still be dry. Another secret for decrease the dilution of the rum with ice is to use it in large quantities: unfortunately many people still believe that less ice corresponds to less dilution of the rum although the truth is exactly the opposite and that is the more ice you use in the rum, the lower its dilution will be.

Rum with ice in cocktails

As mentioned, the different use of ice in cocktails depends on the type of products used to compose it: a cocktail based on rum only or rum and other spirits will be mixed, a cocktail that will include citrus fruits in addition to rum, fruit juice, syrups, milk and eggs will be shaken or shaken. How long to shake the cocktail depends on what's inside the shaker.


A heavy syrup, for example, will need more stirring time than a cocktail with a lighter syrup. If we are using egg white, it is necessary to shake for a long time to create that soft and creamy consistency required by these types of cocktails. In general, shaking means not only cooling and mixing, but also diluting and therefore the longer the operation, the greater the amount of water released into the cocktail.

The art of mixology is also based largely on the ability to understand the exact stirring times of the cocktail. For those who approach the art of cocktail con rum, all that remains is to study the great barmen and experiment, but we believe this is not a big problem.