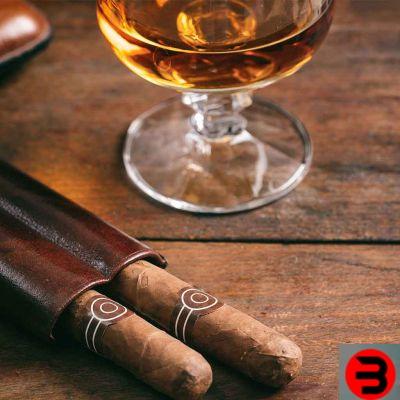 The Legendary rum it is a rum with a strong Cuban identity, which is also expressed visually, with its beautiful bottle marked with the Cuban flag at the top. The shape of the Ron Legendario bottle it recalls the National Tree of Cuba (the Royal Palm) of which it reproduces the momentum and sinuosity, while the reference for the label is another Cuban classic: the shape of a cigar band. It is a bond that has its roots in a long history of Cuban rum that begins in 1919 when the North American company “Cuban Alcohol Refining Company” decided to found the Santa Cruz Distillery for the production of alcohol and liqueurs.

It was the heyday of Cuban rum, with more than a hundred producers starting to distil rum not only for local consumption, but also for export, especially to the United States. In 1937 the distillery became the property of the Compañía Cubana de Alcohol Industrial SA and in the 40s it began to develop and market new brands including Legendary Rum in 1946. The success of the Legendario rum and two other rums from the Compañía Cubana de Alcohol, the Ron Santa Cruz Carta Blanca and Santa Cruz Carta Oro, was not long in coming thanks to a successful advertising campaign whose slogan was “The three champions of rum”.

After the revolution of Fidel Castro, the Legendary Rum remained for some years in oblivion, as it was not part of the agreement signed by the Cuban government with Pernod Ricard for the export of rum which only contemplated the brand Havana Club. But the quality of Ron Legendario could not go unnoticed for long and thanks to the foresight of the Valencian company CEXVAL (Comercio Exterior Valenciano SA) since 1998 Rum Legendario is known in most of the world. After signing a complex agreement with the Cuban authorities, the Spaniards managed to acquire the Ron Legendario's trademark and the exclusive right to market the range of products that are imported with the identifying attributes of "100% Cuba Origin"

Legendario is a true Cuban ron, ron and not rum because this is the correct name used in the former Spanish colonies. They are ron that have the particularity of being produced with an assembly methodology, the Solera method which makes them different from all rums produced in the French and English colonies. In fact, the Ron Legendario are the result of the blend of several years of rum that are assembled by the masters of the distillery (the Mastro Roneros) following the methodologies borrowed from the Spanish Sherry. The Ron Legendario brand is associated with various rums and liqueurs characterized by years of aging and therefore, 7 years, 9 years, 15 years, but for these spirits we will not speak of age, meaning a single rum, but the average age of the rums the Solera method.


In time Legendary Rom has developed a wide range of Cuban rums, ranging from classic Cuban white rum suitable for cocktails to Great Reserve 15 Years ideal to be tasted neat or with ice. These are typical Cuban rums, characterized by olfactory notes and sweet on the palate and by the typical soft and enveloping flavor, which has made them so appreciated in the world of rum. Consistent with another typical characteristic of rum from Cuba, the alcohol content of these Legendary rum it is moderate, varying between 38 and 40% Vol. Below is a list of the rons currently produced by Legendario, with indications of color, use (for cocktails or for tasting) and their alcohol content.

The latter - Ron punch Legendario Elixir de Cuba 7 Years - among the distillates of the Legendario house is the flagship product in Europe, being a rum liqueur with a low alcohol content and a very soft and sweet flavor particularly appreciated in Spain and in Italy.

Il Legendario Elixir de Cuba is a rum liqueur that stands out from other traditional Cuban liqueurs. At the base of the Legendary Elixir de Cuba there is an excellent Cuban rum aged in oak barrels for seven years, the result of the mixing of different rum barrels with the Solera method. Starting from this aged rum base, the raisins are left to soak for a variable time between 40 and 50 days. Precisely in this ingredient lies the goodness and uniqueness of the Legendary Elixir de Cuba, its rich and sweet aroma, its almost oily texture. Once soaked, the raisins are filtered and finally the product is bottled.

The consistency of the Legendary Elixir of Cuba reminiscent of creams and liqueurs, the predominant aromas are those of caramelized raisins, rum and oak with notes of chocolate and vanilla. Legendary Elixir de Cuba can be tasted alone at low temperatures or very cold. It is also very suitable for the preparation of cocktails and the combination with juices, below we propose a cocktail based on lime and pineapple. This is the Legendary beach with Elixir de Cuba. INGREDIENTS: 5 cl of Elixir de Cuba Legendary Rum; 4 cl of lime juice; 3 cl of pineapple juice; 2cl of sugar syrup. PREPARATION: Mix Legendario Elixir de Cuba with all the ingredients in a shaker with ice. Pour the ice-free liquid into a glass, add crushed ice and top with ginger ale.

Here is our advice that will allow you to buy the Rum Legendario, at the best price on the web. If you register with Amazon Prime, you can receive directly to your home without unnecessary shipping costs this incredible Room.