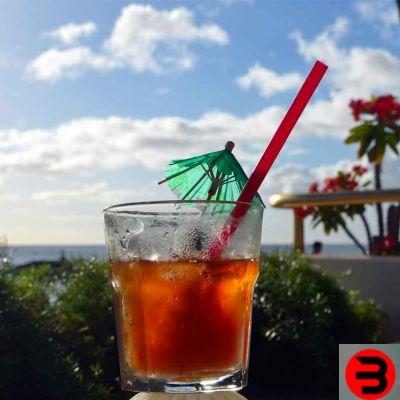 You want the original Mai Tai Cocktail recipe? Then you have to use the Nephew Rum, used in 1944 for its first version, which costs 29.000 a bottle, while a cocktail costs “only” 1.120 euros in the proposal by the Merchant Hotel in Belfast, a hotel that has one of the most famous bars in the world. Of course we are joking because the original 1944 recipe only refers to the use of two rums, without specifying the brand.

The credit for the creation of this drink is attributed to a bartender of the "Trader Vic's Restaurant" in Oakland, California, the historic rival restaurant of "Don the Beachcomber", the inventor of the Zombie cocktail who in turn claims to have created it, but with a different recipe. However, history has attributed the creation of this Cocktail to the "Trader Vic's Restaurant", who also wrote the definitive recipe in the 70s, defining the two rums used in the drink, as Jamaican amber rum and Martinique amber rum.

How do you drink the Mai Tai

The Mai Tai it is part of the official cocktails of the IBA (International Bartenders Association). The origin of the name is to be found in the word "good" which translates into Tahitian as "Maita'i": according to legend it is the exclamation that a customer of "Trader Vic's" would have made after tasting it. He reached the pinnacle of popularity in the 50s and 60s, also appearing in 1961 in Elvis Presley's "Blue Hawaii".

Per prepare a perfect Mai Tai Cocktail, you must have a highball glass, of great rum and a shaker. All the ingredients are shaken together in a Boston shaker filled with ice, excluding the dark rum. Pour all the contents into the glass and add the dark rum to it so that it remains on the surface. It should be served with ice cubes, on the rocks.

Here are the ingredients indicated by the IBA (International Bartenders Association), although there are infinite variations including the almost official one of "Don the Beachcomber":

Rum for Mai Tai: which one to buy

There are various web shops where buy Rum for Mai Tai cocktail, but we recommend doing it on Amazon. Fast shipping, guaranteed and above all you will never risk losing your money. Payments are always insured and if you do register with Amazon Prime, you can receive the Rum at the best price on the web and especially without unnecessary shipping costs.