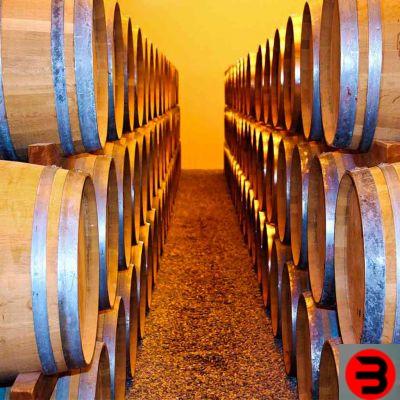 Rum aging normally takes place in wooden barrels, due to the ability of this material to create micro-oxidations that transform and evolve the distillate. The concentric rings that annually mark the growth of a tree create natural micro-vessels and make the wood porous, allowing subtle exchanges between the rum and the air of the environment that houses the barrels.

The choice of wood essence is crucial, such as the density of its fibers and the size of the natural micro-vessels created by the tree's growth rings (ranging from less than 1,5 mm to more than 3 mm), which determine its porosity and therefore the quality and quantity of micro-oxidations.

Thanks to these micro-vessels, oxidation will create the typical aromatic components of the distillate. In contact with the wood, the rum will extract the tannins and take its typical color. A rum that rests in a new barrel will have a more tannic extraction than a rum aged in an already used barrel, because over time these micro-vessels tend to become clogged.

How an aged rum is made

The main criteria that influence the maturation of a rum are different. The quality of the container is of primary importance and therefore the quality of the elements that make up the barrel, namely the wood, its seasoning and toasting. The nature and quality of the wood used, the relationship between the volumetric capacity of the barrel and its contact surface with the rum, are criteria that directly influence not only its color, clarity and brilliance, but also its development and improvement.

The barrel is still built by craftsmen, using only wooden slats, so that there is no interference between the rum and the surrounding environment. The staves are folded and then joined with iron circles. The result, which will be verified with a tightness test carried out with water, will be a container impermeable to liquids, but which will allow the exchange between the rum and the air outside the barrel. Another decisive phase after the construction of the barrel is its roasting (bousinage). Always performed directly with fire, the technique has developed leading - after years of experimentation - to consolidated methodologies that allow us to predict the effects on the distillate.

Also the size of the barrels has a decisive influence on aging rum: for example, the same rum aged in a 100-liter barrel will have a greater percentage loss than that which rests in a 450-liter barrel, but its aromatic profile will be more complex and will appear much older to our olfactory and gustatory receptors compared to rum extracted from the largest barrel.

Naturally, since the barrel is a transpired element, the rum will undergo evaporation, which will be influenced by parameters such as the average temperature and the thermal excursion between day and night, the humidity rate and atmospheric pressure. The circulation of the air on the other hand has its influence because the evaporation of the rum will be less significant if the cellar is poorly ventilated. You can learn more about the effects of the environment from a qualitative and quantitative point of view here how different it is to age a rum in Europe compared to the Caribbean.

In the French colonies, rums intended for aging they were mainly housed in old cognac barrels. Rum, being originally considered less valuable than cognac, used barrels already used for the famous French distillate, given that the cognac production disciplinary allowed the barrels to be used only once. So by tradition or for economy and given the excellent results of the first experiments, the aging of French rum from the beginning it took place in used oak barrels.

One wonders if the aroma of cognac somehow influences that of rum: the answer is that no rum will have a hint of cognac, since the residual alcohol inside will evaporate during transport and the traces that permeate again the staves will be the first to evaporate. We remind here that an old French rum (agricultural or not) must remain in cask for at least three years, which excludes any aromatic memory of the previous spirit, that is of cognac.

The origin of the use of bourbon barrels for rum aging must be sought in the era of prohibition in the United States. In fact, from 1920 to 1933 with the 18th amendment all alcoholic beverages were banned, including bourbon, whose producers found themselves with an enormous quantity of unusable barrels. An advantage for the first distillers who had the great idea of ​​aging their rum in the land of origin (early XNUMXth century), such as the pioneers Jacques Bally, Depaz, Saint-James and Clément.

Even after the end of Prohibition this source of supply of barrels with a capacity between 180 and 250 l remained: distance and costs related to transport are reduced, the complementarity of the use of barrels ensures a revaluation of American oak (the world's leading producer of oak) without having to depend on the high costs of importing French barrels (second world producer of oak barrels and 1st of barrels).