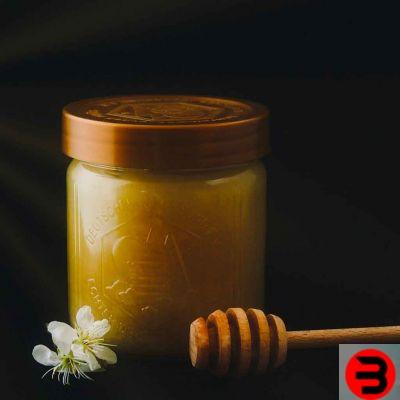 Honey Rum is typical of the inhabitants of the Canary Islands. Increasingly widespread and appreciated all over the world, this distillate is obtained from the processing of sugar cane and precisely from the juice extracted from the fermentation of molasses. Of course, to be a true honey rum it will be necessary to add at least 2% of the volume of bee honey to the distilled rum.

This percentage is defined by the "Denominación Geográfica" (Geographical Denomination) by the Canary Islands government in 2005. This meant that strict rules were established to guarantee its flavor, quality and correct production procedure, with the aim of protecting its qualities. craft honey rum.  The history of honey rum of the Canary Islands is linked to the traditional preparation that was carried out in homes and small bars often managed by the families who populate the coasts. Saw the great success that honey rum (Ron miel in Spanish) collected from the inhabitants of the islands and tourists, its artisan preparation has been accompanied by that of companies that have still respected the original recipe.

Honey rum from the Canary Islands, has a very long history, given that the first evidence of its preparation dates back to the 700th century. The practice of combining rum with honey or fruit at that time was very popular, because it served to make rums more drinkable that at the time were much more "rough" than the distillates on the market today. After a long period in which honey rum was produced only by hand, since 2005 also to support its large-scale production, its composition has been regulated with a designation of origin protected by the Autonomous Community of the Canary Islands.

The disciplinary of Rum with Canary Honey it precisely establishes the ingredients for the preparation: rum derived from the distillation of sugar cane molasses, water, sugars, plant extracts and at least 2% of the volume of bee honey. The first phase of the preparation consists in mixing the water with the sugar and the honey in large containers, then the rum and the plant extracts will be combined together. Once the mixing process is complete, the product must rest for two days, during which checks are carried out to verify that it meets the required standards of Ronmiel de Canarias. Its alcohol content may vary from 20 to 30% vol.

The characteristic flavor of Canarian honey rum it must be intense, sweet, soft on the palate, its range of colors may vary from antique gold to intense mahogany. Ronmiel's number one brand is produced by Arehucas - one of the largest rum cellars in Europe - founded in the Canaries over a hundred years ago. Other famous brands of Canarian honey rum are definitely Artemi, Cayo Grande Club and Guajiro. Each distillery has its own production method and the flavor of honey rum will therefore be very different between the various brands active in the islands.

But is honey rum actually a rum or is it more correct to call it liqueur? Given its maximum alcohol content of 30% vol. which is lower than the minimum allowed for a rum (37,5% vol. see our article on alcohol content of rum ) it is more correct to call it honey liqueur. However, even if compared to European legislation it is actually a liqueur, the producers have been allowed to keep the original Ronmiel wording, which historically identifies this honey liqueur. In Italy and in other countries where rums mixed with honey are produced, if the resulting alcohol content is lower than that allowed for a rum, it is necessary to use the words "rum and honey liqueur". This is the case of an excellent product from Marzadro, the rum liqueur and Indian honey.

It is well known that Italians love the Canary Islands historically and over the years they have begun to appreciate the liqueur based on rum and honey that is produced. This is how one of the historic Italian distilleries, Marzadro - active since 1949 - decided to launch on the market the rum and honey liqueur "Pellerossa" which immediately received a well-deserved success. The peculiarity of the Pellerossa liqueur is that of using rums aged up to 12 years that are mixed with selected honey from Trentino beekeeping.

The result of the combination of aged rum and signature honey is a liqueur that combines elegant aromas and fragrances with spicy notes, with a rich and sweet flavor.  Rum and Red Indian honey liqueur it lends itself to being drunk after a meal, but it is also very popular as an aperitif and as a base to customize classic cocktails or to create new ones. We liked the Sitting Bull cocktail, consisting of Red Indian Rum Liqueur, vodka, Red Bull pineapple and strawberries in cubes. One of the easiest cocktails based on rum liqueur and Red Indian honey to prepare - just combine the ingredients in a tumbler - but fresh and thirst-quenching. The alcohol content of the rum and red Indian honey liqueur is 30% Vol. And it is recommended to serve it at low temperatures.

Have you ever thought about making homemade honey rum? Homemade honey rum it is a sweet and light liqueur, with a sweet taste. This rum is excellent to be enjoyed straight, or with some ice cubes. Have one in the pantry rum-based drink so particular, it can help you prepare excellent cocktails with a unique flavor. To obtain a good product it is essential to start with good quality basic ingredients. Here is the list of ingredients and the doses to prepare a perfect one homemade honey rum.

Ingredients for a liter of liqueur:

half a vanilla pod

The preparation is very simple; pour the honey into the rum and mix so that the ingredients dissolve completely, joining in a single solution. Cut the lemon zest very thin and add it to the mixture together with the vanilla and cinnamon sticks. At the end of the procedure put the container with the mixture in the dark, preferably in a cool place. Leave everything to macerate for at least 48 hours. Completely remove the lemon zest and the spice sticks, filter everything and pour it into a nice bottle.

What to pair with homemade rum and honey

It is not a diversi modi per taste this rum homemade. This, in addition to being ideal to accompany sweets and biscuits, is also exceptional when paired with aged cheeses and cheese with aromatic herbs, or with fresh fruit salads. Many use rum and homemade honey to combine with a splash of whipped cream.