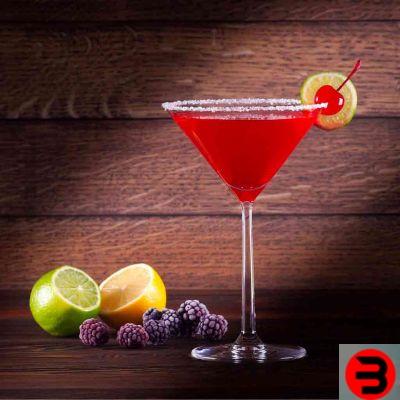 Bacardi Cocktail is an international cocktail based on Bacardi rum Carta Blanca, lime juice and grenadine syrup, and was created in 1917. It is a variant of the Daiquiri in which sugar is replaced with pomegranate syrup called grenadine from the alternative name "grenade" which was attributed to the fruit. The rum, on the other hand, is the famous Bacardi, created by Don Facundo Bacardi, a native of Catalonia, who had founded his first distillery in Santiago de Cuba in 1862.

There are two different interpretations on its creation: there are those who believe that originally it was only one Daiquiri with Bacardi rum, subsequently modified, used grenadine instead of sugar syrup and those who believe this ingredient was part of the cocktail since its origins. Even the Bacardi cocktail - like the Daiquiri - from the very beginning also became famous for its “frozen” version, that is, shaking the cocktail until the ice was reduced to the consistency of a sorbet.

The popularity of the cocktail was immediately sensational, so much so that the barman of New York hotels and restaurants replaced the Bacardi rum with cheaper rums, a practice that was soon interrupted by the Bacardi Company's intervention in the State Supreme Court aimed at protecting the brand and the flavor of the cocktail.

The case had a certain echo in the United States and the sentence pronounced by the president of the Bacardi Company, responding to the judge regarding the secret of Bacardi rum: “This is a secret I cannot reveal!”. In the reasons for the sentence, the judge also included this motivation, explaining that "Bacardi has an exclusive and original taste" and therefore the Bacardi cocktail was prepared exclusively using Bacardi rum.

How to drink the Bacardi Cocktail

Bacardi Cocktail is internationally recognized as one of the most famous rum cocktails, included in section Unforgettable rum cocktails by the world association of bartenders. Its characteristic pink peach blossom color gives it great visual elegance and can be consumed both as an aperitif and as an after dinner drink.

Being a rum cocktail containing fruit juice, it is a drink that must be shaken and not mixed, to be then served in a classic martini glass previously frozen. In case you prepare a Frozen Bacardi Cocktail, the ingredients will be placed in a mixer to then be served in a medium tumbler. Its fresh and aromatic notes make it perfect for pairing with spicy foods, marinated fish and cantabrian butter and anchovies canapés.

Here are the preparation methods from the IBA (International Bartenders Association), which consolidated the ingredients and preparation techniques of this famous cocktail:

Pour the rum, lime and grenadine syrup into an ice shaker, shake well and strain into a cocktail glass previously cooled with ice cubes.

Best rum for Bacardi cocktail: which one to buy

However, we comply with the provisions of the IBA and therefore we recommend that you use the Bacardi Rum Carta Blanca, a distillate with an absolutely unsurpassed quality / price ratio.