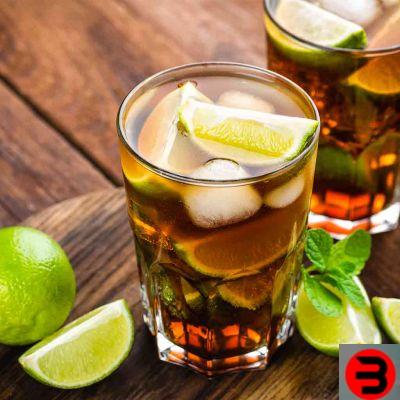 Although many consider the two famous cocktails interchangeable, it is absolutely not the same drink.
Cuba libre e rum e cola they have the same soul in common rum but they are prepared with different ingredients. The common origin of the two cocktail is rum.

The origini of Cuba Libre

The famous Cuba libre boasts an ultra-centennial birth that coincides with the years at the turn of the twentieth century, when Havana, the Cuban capital, experienced dramatic moments due to the war of independence from the Spanish. We are between 1898 and 1901, in the midst of the conflict between Spain and the United States of America, rushed to help the Caribbean island. The American soldiers fight alongside the Cuban ones who share the battle cry "For free Cuba!", Whose translation is"for free Cuba".

Soon, this battle cry turns into the habit of toasting, with a mix of rum and cola whose name coincides with the wish shouted before the fighting, precisely "¡For free Cuba!". And this explains the origin of a name, fictionalized at the right point but with so much truth in the body, which soon became a battle cry, capable of uniting two different peoples, as well as perfectly blending the two main ingredients: Cuban light rum with cola, typically American.

Both rum and cola were widely used drinks in those times and their union gave life to a legendary cocktail, one of the most popular and appreciated in Italy and in the world. But the surprises do not end in the mystery of the birth of Cuba libre. Some connoisseurs prefer to make the birth of the drink coincide with that of a newspaper "Cuba Libre".

Someone even dares to say that Cuba libre is not born suddenly and is not linked either to the War of Independence or to the protest newspaper, but that since time immemorial it was used to drink an iced drink which, in addition to rum, included a dose of caramel instead of cola. Today, this cocktail represents an icon for connoisseurs, one of the absolute cocktail a base di rum most appreciated and drunk!

It is not difficult to drink a good one glass of Cuba libre. The ingredients needed for true Cuba libre are

The barman suggests pouring all the ingredients into a cold glass filled with ice and mixing them together. The garnish of a lime wedge is the final touch. In some bars it is frequent that it is served with the addition of other ingredients, but it is not the original recipe or even the famous variant of Rum and Cola.


How to make a rum cola

Despite being a successful and well-known drink, the Rum and Cola it does not have a certain origin. It has an unmistakable taste, very decisive and strong because free of lime juice. Being the perfect one variant of Cuba Libre it is unique for its flavor born from two precise ingredients, without adding anything else. Rum and Cola. It is prepared by pouring into a glass, cold and filled with ice, 50ml of clear rum and 12ml of cola.