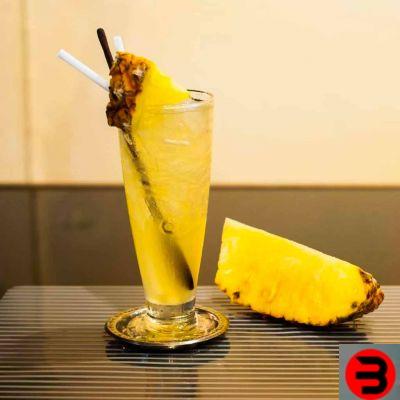 Il Cocktail Malibù is a pleasant alcoholic drink with a tropical taste, very sweet and pleasant, originally from Barbados. It is a coconut rum among the best known in the world, thanks also to the iconic white bottle with the image of two palm trees on a red sunset that make it immediately recognizable. It is used as a base for the creation of numerous cocktails but can also be enjoyed alone at the end of a meal as a dessert liqueur thanks to its low alcohol content.

The Malibu was originally born on the island of Curaçao from the idea of ​​some bartenders who decided to make a rum to use as a base to facilitate the preparation of the Piña colada, a cocktail a base di rum and coconut milk with the addition of pineapple juice.
The original recipe of Malibu involves the fermentation of molasses and its subsequent distillation with the production of the classic white rum, which will then be transferred to oak barrels and mixed with coconut to acquire its characteristic flavor. Aging can last up to two years and allows us to obtain a rum with a unique, aromatic flavor and perfect for having fun lightly.

In addition to the coconut Malibu five other flavor variants were subsequently produced, so it is now possible to find the Malibu with melon, pineapple, mango, banana and passion fruit. All these categories of liqueur are mainly used as a base for the creation of cocktails with a tropical scent with the addition of other preparations based on fruit or carbonated drinks. It is also possible to taste Malibu with the simple addition of ice or milk.

The most typical way to enjoy Malibu involves adding vodka and orange juice to create the cocktail of the same name. The necessary ingredients are as follows:
2 parts of Classic Malibu rum
2 parts of Vodka
1 part of orange juice
Preparation: Fill a highball glass with ice and add the ingredients. Mix and decorate the glass with an orange zest.

Other famous cocktails that can be prepared with this liqueur are:


Preparation: pour the liquid ingredients and the ice into a mixer, chopping everything. Mix thoroughly and serve in a tall stemmed glass decorated with pineapple slices.

Preparation: mix the ingredients in a long glass, add ice to taste and garnish with apple slices.

Prepare the coconut rum
If we don't want to rely on the well-known brand and prefer to prepare the Coconut rum we can obtain a satisfactory result by adopting the following recipe:
Ingredients for a bottle of 12 servings:

Preparation: mix all the ingredients and add the seeds extracted from the vanilla pod. Mix well and pour everything into a glass bottle. Leave to rest in the fridge for at least two days before tasting. This way you can better appreciate the aroma of vanilla and coconut.