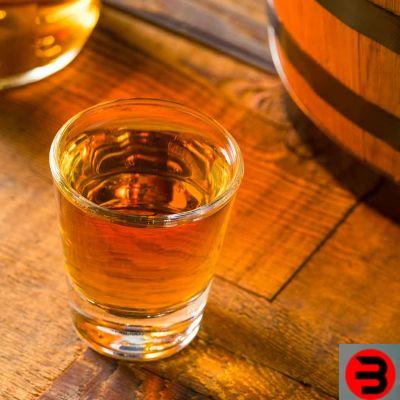 Il rum Bumbu has recently met with great international success. The distillery is located in Barbados, the island to which the origin of the rum is attributed, produced since 1703 by the Mount Gay of the St. Michael district. Actually on the Caribbean island that hosts the Bumbu distillery, rum had been produced since the mid-17th century, even if it was a very crude distillate, even called “Kill-Devil”.

The origins of the name of Bumbu rum are traced back to this period, when the sailors of the West Indies they called Bumbu a cocktail made from this infernal distillate and Caribbean fruit and spices. The aim of course was to make it more drinkable. The origin of the Bumbu rum distillery instead it dates back to 1893, a period in which the production plants - as in many Caribbean islands - were born very numerous, following the development of sugar cane crops, at the very precious time.

Barbados represents the ideal distillation location for Bumbu rumIn fact, the water used is the Barbados groundwater, purified through natural limestone, so as to allow distillers not to filter the water before use in the fermentation process. THErum Bumbu following the tradition of rum of English origin, that is of the countries already colonies of the United Kingdom, is produced with sugar cane molasses. The quality of molasses, which is a by-product of sugar refining, depends on the climate and the characteristics of the soil on which the cane is grown.

Precisely in search of excellence in raw materials, the distillery has also chosen to turn to other nearby Caribbean islands, importing sugar cane also from countries such as Guyana and Belize, universally known for the absolute quality of production.

Bumbu rum is handcrafted in small batches, in two versions: rum Bumbu Original with aging for up to fifteen years in American oak barrels that had already hosted Bourbon and rum Seasonings XO which boasts an aging of 18 years in white oak Sherry barrels from Andalusia.

The yeast used in the fermentation phase is one of the secrets of the production of these rums and dates back to 1840, while two modern continuous stills are used for distillation. At the origin of these rums, as mentioned, there is sugar cane which comes not only from the cultivation of Barbados, but also from other Caribbean islands. For the ron Bumbu Original, we are even talking about seven types of sugar cane that with their minerals and other elements present in the cane contribute to creating this balanced rum: the cane of Barbados (with hints of vanilla), that of Belize (notes of coffee), of Brazil (tropical fruits); of Costa Rica (very aromatic); from the Dominican Republic (full-bodied and sweet); from El Salvador (floral aromas); Guyana (chocolate flavors); Honduras (with notes of orange and cinnamon).


Il rum Bumbu XO it is instead produced with Panama sugar cane and boasts a higher alcohol content, as well as a longer aging being classified as rum XO. This is the newcomer to Bumbu, in fact the first bottles were only marketed in 2019, but in time to win prestigious industry awards such as "Best In Category" from the International Wine & Spirits Competition in Los Angeles.

To underline the prestige of these two rums, the beautiful bottles embellished by the oxidized metal “X” medallion, which stands out from the golden bottles of the Bumbu Original rum and the opaque black ones of the Bumbu XO rum. However, these are products that are the result of research aimed at obtaining refined olfactory and tasting notes, which allow you to sip these rums alone or simply combined with a cigar. However, there is no shortage of proposals on the official website cocktail a base di rum given the success that the distillate obtains among mixology enthusiasts.

Il rum Bumbu it is rapidly establishing itself on the market. Original Bumbu is available in Italy and in more than 60 countries around the world, while rum Bumbu XO it is being launched in bars, discos and retailers, but it is also available on the web. Among the many online sales channels, we recommend that you buy it on Amazon. Fast shipping, guaranteed and above all you will never risk losing your money. Payments are always insured and if you do register with Amazon Prime, you can receive these rums directly at your home best price on the web and above all without unnecessary shipping costs.