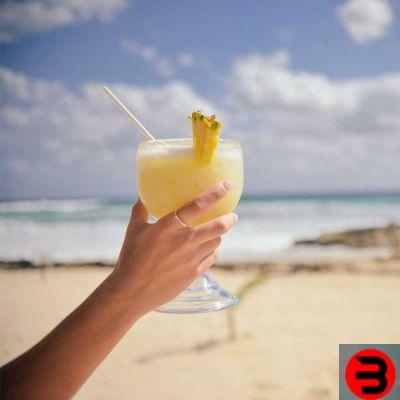 The Pina Colada - from the Spanish “pressed pineapple” - is a long drink based on light rum, coconut milk and pineapple juice. Of medium alcohol content - 12,7 ° -, due to its freshness and typical sweetness it is one of the best known and most requested cocktails in the world. As a rule, it should be served in a Hurricane glass and can be garnished with a slice of fresh pineapple or with maraschino cherries. This very famous drink, to which the singer Rupert Holmes even dedicated a song, is included in the list of "Contemporary Classics" in the classification that the IBA - International Bartender Association - draws up every year distinguishing between "The Unforgettables", "Contemporary Classics ”And“ New Era Drinks ”.

Stories bordering on legend and claims of paternity have been chasing the origin of the Piña Colada for years: there are those who claim that the creator of the original cocktail is the pirate Roberto Cofresì, who is said to have used a drink of his own invention. based on rum, pineapple juice and coconut milk, but the sources are unofficial and upon his death in 1825 Cofresì may have taken the original recipe to the grave.

In 1954, a bartender at the Caribe Hilton in San Juan, Ramon Manchito Marrero, claimed to be the inventor of the Piña Colada, the result of countless experiments. Almost a decade later, in 1964, Ramon Portas Mingot, another San Juan bartender, claimed authorship of the drink's original recipe. What is certain is that since 1978 it has been the official drink of the Caribbean island of Puerto Rico, where the Piña Colada Day is celebrated every year on July 10th.

How to prepare the Pina Colada

La original recipe of the Piña Colada It provides:

The ingredients are placed in the "blender" and minced for about a minute. The ideal consistency of the Piña Colada is frothy, it must not look like a slush, so the ice must be dosed very carefully; once ready, the cocktail should be garnished and served immediately.

All cocktails, especially the most famous ones, undergo reinterpretations over time, but there Piña Colada turns out to be the most modified in the world: if the hardest and purest bartenders stick exclusively to the original recipe just illustrated, others, to meet the tastes and needs of customers, have introduced variations that have spread rapidly: the most famous it is certainly the non-alcoholic version, the Virgin Piña Colada - also known as Virgin Colada - which involves the simple elimination of white rum. There are, however, many others:

Amaretto Colada, in which rum is replaced by amaretto;
Kiwi Colada, with kiwi juice instead of pineapple juice;
Banana Colada, in which banana is added to the original recipe to increase the sweetness;
some variations that involve the use of vodka instead of light rum;
the Piña Colada prepared with dark rum instead of white.


To these reinterpretations, we add the bitter diatribes among experts in the sector on the use or not of lime to add a touch of acidity to the cocktail.

The Piña Colada is not a simple summer cocktail, but a real Caribbean experience, so it can accompany many dishes as a fine drink: the contrast between the sweetness of coconut and the acidity of pineapple make it perfect to accompany desserts. - cheesecakes, brownies and mud cakes to name a few - and fruit tarts. For fans of strong pairings, the Piña Colada goes very well with prawns and shellfish.

Where to buy Rum

There are various web shops where buy Rum for Pina Colada, but we recommend doing it on Amazon. Fast shipping, guaranteed and above all you will never risk losing your money. Payments are always insured and if you do register with Amazon Prime, you can receive the Rum at the best price on the web and especially without unnecessary shipping costs.