All the information about the Pale Ale

Pale Ale is a type of drink that is obtained through a method of temperate fermentation. It is mainly used light malt, a variety of malt that, in English, is known as pale-malt, hence the name.

At ForBeerLovers we're going to tell you everything you need to know about Pale Ale, one of the most popular and widely consumed types of beer in the world. 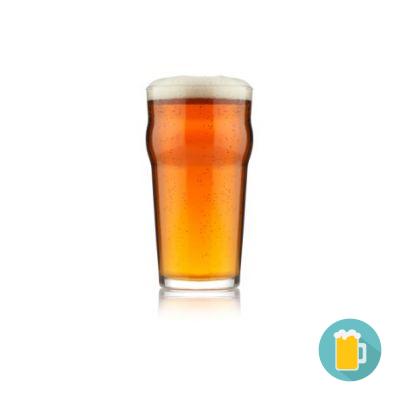 The Pale Ale is a type of beer that has a lighter color than the rest of the beers that are of the ale type. The reason is that it has a higher proportion of light malt, something that gives it this characteristic and peculiar tone.

Some of the features of the Pale Ale are the following:

Malt aroma with a touch of caramel.

Pale Ale is a type of beer with a high alcohol content ranging from 5 to 7 degrees.

They are characterized by a lighter color, due to the large amount of light malt.

The taste of the Pale Ale usually has fruity touches and therefore a sweeter taste.


How to serve Pale Ale

To serve a Pale Ale correctly we must place the glass at an angle of approximately 45 degrees. When we reach the end of the glass, we begin to straighten it so that the right amount of foam is left.

What to eat with

A good match for Pale Ale is with salty snacks such as sausages, nuts or olives.

This type of beer has ingredients like the ones we'll show you below. Take note!

Do you want to make Pale Ale at home? You must know that, following the all-grain method, you can make a high quality beer yourself. To do so, follow these steps:


Here's a video to show you how to make Pale Ale at home:

The term "Pale Ale" was first coined in 1703 to refer to beers made from coke-dried malt. These beers were lighter in colour than the others drunk at the time.

It is important to note that, at that time, beers in the UK were dark. Therefore, the appearance of the Pale Ale was a revolution in the sector. It was Burton's brewers who created this style of beer that is characterized by a paler tone and a more consistent body.

Nowadays, there are different types of Pale Ale depending on the practice carried out during its manufacture. Here are the most common types.

It's a beer known by the acronym APA. It appeared in 1980 and used American hops. They offer 5% alcohol content and, among its ingredients, it is worth noting the amount of hops known as Cascade. In fact, it is the American hops that make the difference compared to the British or European Pale Ale; however, they are quite similar to those from India.

This is the kind of Pale Ale that is very pale in color and that we commonly know as "blondes". They are very common in Europe, especially in Belgium, France and the United Kingdom; within the Latin American continent, this type of beer is very popular in Brazil. This drink is characterized by its dry, slightly bitter taste with a touch of sweetness typical of malt. They are lighter and their golden color gives them the name of "blonde" that competed with the more traditional Pale Ale. The alcoholic proportion is 4 to 5%.

This is a type of Pale Ale that emerged in the early 19th century when this type of beer had begun to spread throughout the country. The main difference is that they have a more bitter taste and, therefore, the characteristic sweetness, here, dissipates.

This beer is a type of Pale Ale that was developed in England with the aim of selling it in India, a continent that was an English colony. In 1829 it was the first time that the term "India Pale Ale" was used and it was due to an advertisement. As mentioned above, this type is the most similar to that of the United States, although it has differences in taste and aroma.

And we finish this review to talk about the Strong Pale Ale, that is, the beers that, although they are blond, are strong and with a high alcohol content. Their alcohol content starts at 5%, although the vast majority of them exceed 7% and can even reach 12%. These beers are brewed with pale malts and the companies have experimented until getting in 1994 a Strong Pale Ale of 24% alcohol.

The 3 best brands of Pale Ale

We conclude this article by talking about the most outstanding Pale Ale brands of the moment. Although there is a great variety of options, here we are going to leave you a list with the 3 best ones you have to try, yes or yes!

Add a comment from The Pale Ale Beer: Characteristics and Types

99%
We have been able to give 99% of times, the solutions that users were looking for when consulting our page.