All the information about Black Beer

Black beer (in German Schwarzbier) is a type of German lager that is opaque, very dark in colour and has a strong taste reminiscent of chocolate or coffee.

At ForBeerLovers we're going to tell you everything you need to know about Black beer, one of the most popular and widely consumed types of beer in the world. 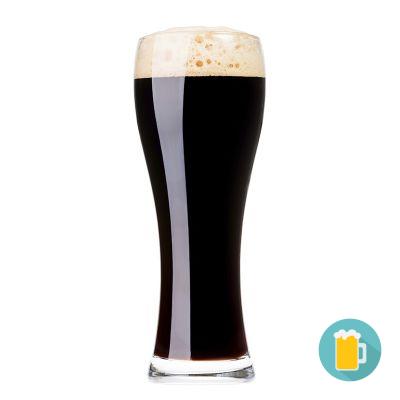 Although they taste similar, they are milder and less bitter than British stouts or porters, due to the use of lager yeast instead of ale and because they are made from roasted malt, which gives them their dark colour.

Some of the characteristics of Black beer are as follows:

Black beer is a type of beer with a high alcohol content ranging from 4 to 6 degrees.

The taste of black beer tends to be slightly sweet

How to serve the Black beer

When serving it, you must incline the glass 45º and put it upright when you have poured 75% of the beer.

What to eat with

One of the recommendations for pairing this drink is chicken wings, postas, cheese boards or matured hams, as you could do with a glass of wine or champagne.

This type of beer has ingredients like the ones below. Take note!

For 10 liters of black beer:

Do you want to make Black beer at home? You should know that by following the all grain method, you can make a great quality beer yourself. To do so, follow these steps:

Currently, there are different types of Black beer depending on the practice carried out during its production. Here are the most common types.

Probably the most popular stout in the world, thanks to its malty taste and strong color. Its main ingredient is barley and its fermentation is typical of ale beers.

These usually correspond to the stronger black beers, with a powerful taste and an alcoholic percentage of approximately 10%.

In this variety, the barley is not malted, but caramelized. The result is a beer with a slightly sweet taste and a slightly lighter color than porter.

Brewed with malt, resulting in a full-bodied, mild-flavored beer.

It is a German beer of low fermentation, with an alcohol content that can reach 5%.

The 3 best brands of Black beer

We conclude this article by talking about the most outstanding Black beer brands of the moment. Although there is a wide variety of options, here we are going to leave you with a list of the 3 best ones you have to try, yes or yes!

Beer with Lemon: Characteristics and Types

Information about beer with Tequila

Add a comment from Black Beer: Characteristics and Types