All the information about the Wheat Beer

Wheat beer is a beer, usually high-fermented or ale, which is brewed with a large proportion of wheat in relation to the amount of malted barley.

At ForBeerLovers we're going to tell you everything you need to know about wheat beer, one of the most popular and widely consumed types of beer in the world. 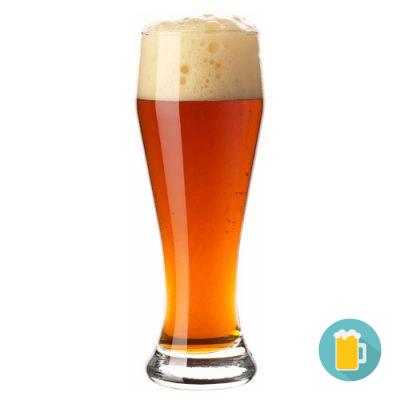 A light aroma of hops with hints of citrus.

The wheat ones require a more inclined glass that stops the formation of foam,

An infallible pairing in the case of wheat beers are the marine flavors, which the carbon dioxide of the beer is able to drag from the palate. The citrus touches can also have their equivalent on the plate, with grated or seasoned fruit

This type of beer has ingredients like the ones we discovered below. Take note!

Do you want to make wheat beer at home? You should know that by following the all-grain method, you can make a high-quality beer yourself. To do so, follow these steps:


Here's a video so you know how to make a wheat beer at home:

Wheat beers are a variety that dates back to the Stone Age in modern-day Iraq, which was also made in Egypt in the time of the pharaohs and began to be produced in Germanic lands in the Bronze Age. It is in Bavaria and in the current territories of Belgium and the Netherlands where the practice of using wheat to make beer took root, despite the fact that in the Middle Ages it tried to be limited to avoid a shortage of bread; in fact, from here came regulations such as the Reinheitsgebot the Bavarian Beer Purity Law of 1516.

The Weizenbier or Hefeweizen is a traditional Bavarian beer in which a significant proportion of malted barley is replaced by malted wheat. According to the Purity Law of 1516, Weißbiers brewed in Germany must be fermented using a "top-fermenting" yeast, which is technically a "brewer's yeast".12 Specialized yeast strains that produce overtones of banana and clove are used as by-products of fermentation.12

The Witbier is a highly fermented barley and wheat beer brewed mainly in Belgium and the Netherlands. It gets its name from the suspended yeast and wheat proteins that make the beer look cloudy or white when cold. It is a descendant of those medieval beers that were flavored and preserved with a mixture of spices and other plants such as coriander, orange and bitter orange known as "gruit" instead of using hops

A minor variety of wheat beer is represented by the Berliner Weiße, which is low in alcohol (2.5% to 3% alcohol content) and intentionally sour. Sweetened syrups of lemon, raspberry, or spriggrass are often added before drinking.

The Leipziger gose is similar to the Berliner Weiße but slightly stronger with about 4% alcohol. Its ingredients include coriander and salt, which are unusual for German beers.

Belgian lambic is also made from wheat and barley, but differs from almost all beers in the use of wild yeast for spontaneous fermentation.

The 3 best brands of wheat beer

We conclude this article by discussing the most prominent wheat beer brands of the moment. Although there is a wide variety of options, here we are going to leave you with a list of the 3 best ones you have to try, yes or yes!

Add a comment from Wheat Beer: Characteristics and Types

96%
We have been able to give 96% of times, the solutions that users were looking for when consulting our page.