The Vinification and Fermentation of Red Wines

The red vinification. The maceration of the musts on the marc and its duration. Fulling and pumping over. The malolactic fermentation of red wines.

La red vinification involves a phase of  maceration, that is of contact between marc e must during the fermentation. The start of fermentation involves therise in temperature (up to 30 ° C) which, together with the action of the alcohol that begins to form, dissolves the colored pigments (anthocyanins) and the tannic substances present in the grape skin which will then be found in the wine afterwards. the separation between solid and liquid parts (svinatura). 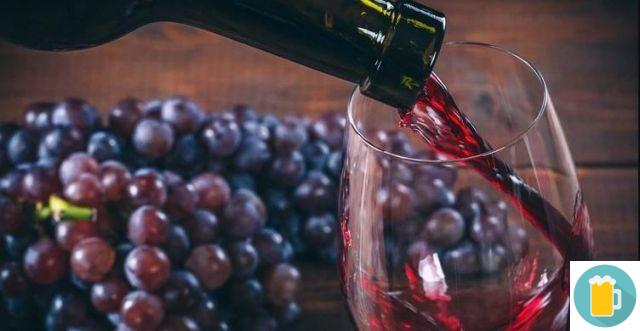 La fermentation of Red wines it is a more complex operation than that of White wines. In fact the skins left to macerate with the wine tend to move upwards due to the effect of carbon dioxide until it floats on the surface, forming the so-called "hat". Once in contact with the air the skins that are in the part top del can dry out or give rise to acescence or even rot. Therefore it is of paramount importance that the skins are always completely immersed in the wine. To do this two or three times a day, and in any case at regular intervals throughout the fermentation period, the so-called follatura, which consists in mixing the skins in the must. Alternatively, you can use the replacement, the "watering" the cap with part of the must taken from the fermenting mass. These operations ensure a better extraction of coloring substances and polyphenols from the skins, also favoring the oxygenation of yeast, thus making them more active.

La maceration in red vinification it can last up to 6 or 10 days or more, depending on typology of grapes and wine to be produced and therefore the quantity of substances to be extracted. For some wines of great value the maceration phase can be much longer (until 40 days). During this phase it will be necessary to check the intensity of the colore of the must and the quantity of polyphenols, so as to separate the skins at the right time, a condition that can occur both at the end of the alcoholic fermentation and during its development.

La svinatura, ie the separation of the exhausted solid substances from the "flower wine“, In fact it is carried out by pouring the liquid fraction into another container by means of oenological pumps. According to the quality of wine to be produced, the solid parts can be pressed to recover the part of wine remaining in contact with the skins. This can be added to the flower wine or used in the production of less valuable wines. Finally the liquid mass is poured into barrels, barrique, containers in steel stainless or others village winemakers for the stage of aging and maturation.

After racking and during the initial part of refinement, the environmental conditions lead to malolactic fermentation, i.e. the transformation ofmalic acid coming from the skins in lactic acid, less strong and aggressive. The "malolactic“, Conducted by microorganisms called lactobacteria, it does not happen automatically, but is a function of the temperature and environmental conditions that can favor it. It is usually recommended for red wines, because it gives greater softness e scents more complex to wine.

All information on Champagne

add a comment of The Vinification and Fermentation of Red Wines