Il wine is the product of alcoholic fermentation of sugar contained in must of grapes. In this context for grape means the fruit of the plant known as vitis vinifera, to which all the species of vines (i.e. specific cultivars of screw) which differ from each other morphologically and from the organoleptic point of view of the wines obtained from them. 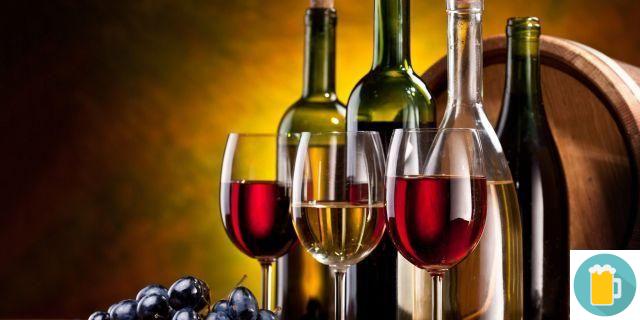 from vitis vinifera (or European vine) all derive vines suitable for the production of wine and table consumption. Another variety of vine, vitis labrusca (ie wild, also known as American vine) has a high tannin content, lower sugar content (hence the unsuitability for wine production) and a typical "wild" or "volpino" taste. "(Foxy). The vine has a vegetative cycle annual, so it allows a crop (harvest) per year, in end summer-early autumn (in our hemisphere from early August to early November), from which the vintages of wine, also reported in the bottle, which always refer to the year of harvest.

The vine is cultivated in temperate zones of the northern and southern hemisphere, in a strip that in Europe goes from center of Germany (In France at the height of Paris) up to Southern Italy, thus including the whole Spain Greece and part of the Middle East. The area extends from the 30th to the 50th parallel (northern hemisphere) and from the 30th to 40th parallel (southern hemisphere). The heat (quickly Ice and extreme heat), thehumidity (not suitable for too rainy climates), the light (needs good exposure) are the other factors that determine whether or not the vine can grow in a given environment.

Once upon a time the grapes sellmiata, is transformed into wine in the cellar. This process is called winemaking. The grapes come pressed, must what if you get it is done ferment giving rise to the wine real. Depending on the type of grapes used, there are different ones typology of wine, this yes monovitigno if they are produced from a single species of grape and called "grapes"Or"assemblages”(Cuvées) respectively in the case that different grapes are used in the vinification phase or different wines are mixed to obtain the final product. After a phase of aging, which can foresee more or less long periods, from a few months in containers of steel up to many years in barrels of wood the wine comes bottled and finally arrives on our tables.

When we taste a wine with the purpose of get an idea of ​​its organoleptic characteristics and its quality, we are doing one tasting. Being a sensory experience, tasting is made up of as many phases as there are senses involved. We then have the phase visual, olfactory e gustatory of tasting.

The pairing of wines with food

Thousands of words are spent during the courses and on the net in relation topairing of food with wines. The sensations of wine and food come together to create a whole that must result harmonic, therefore the art ofpairing it lies in setting up an effect for which a certain type of wine enhances a certain dish and is in turn enhanced by it.

The wine and the food

Information on the Cabernet Franc grape