At ForBeerLovers we want to give you all the information about La Sagra you need to know more about the history of this brand and why it is one of the most popular and consumed globally.

La Sagra is an artisan beer that is brewed in Numancia La Sagra , in the province of Toledo, in Spain, and takes its name from the region of La Sagra , which is the historic Castilian region where it is bottled.

At ForBeerLovers we want to give you all the information about La Sagra  you need to know more about the history of this brand and why it is one of the most popular and consumed globally. 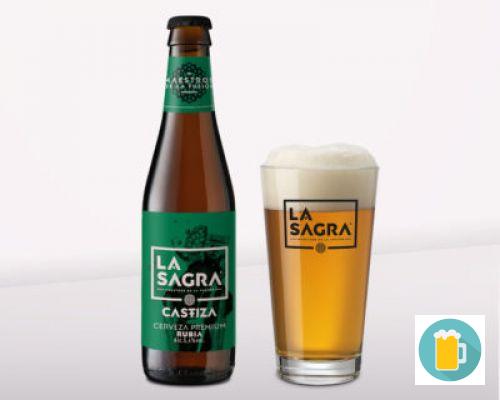 La Sagra is presented as a quality and classic brand and, therefore, it is brewed with the same ingredients of all its history, 100% natural ingredients:

The beer La Sagra was launched for the first time in March 2011, reaching more than a hundred establishments in Castilla-La Mancha and the Community of Madrid in its first month of life.

A few months later, it launched a new brand called Burro De Sancho (a reference to Sancho Panza, a famous character from Don Quixote de la Mancha) aimed at selling in supermarkets, as opposed to La Sagra , aimed at marketing in the catering sector. It was launched for sale in June 2011, being sold in large shopping centres, mainly in Eroski centres. This brand is sold in three types: blonde, red and black.


During the month of October 2011 a new product was launched on the market: La Sagra Bohio, a beer especially indicated to accompany dessert.

To celebrate their first anniversary they launched another beer: La Sagra Roja, whose name corresponds to the reddish shade of this beer

Within the brand La Sagra , we find different ranges of beers that are adapted to a wider public. Below we discover the different types that are La Sagra currently on the market.

The result is a golden-coloured Czech Premium Lager with 100% barley malt, a golden colour, a firm foam, a hoppy aroma and a gradual bitterness with a light malty finish. It contains 5% alcohol.

This beer is the result of mixing selected malts from Spain with selected American hops, resulting in a beer with extraordinary body and aroma. It has a blond colour and dense body. Its alcohol content is 5.4% vol.

It is born from the fusion of 7 European malts with hops brought from America, which generates an incredible fruity taste with delicate caramelized and toasted notes. It has a coppery red color and a dense body. It has an alcoholic graduation of 6.1% vol.

Flanders Blanca de Trigo is a handcrafted Belgian White style beer, with a fruity taste, touches of citrus, smooth and creamy body, with a refreshing and floral finish. It has an alcoholic content of 5.2% vol.

India Pale Ale finds the perfect balance between fruity notes and 70 IBUs of bitterness. Great bitterness, fruity body and citrus aroma. It has an alcoholic content of 7.2% vol.

Reddish roasted beer with a caramelized and mellow taste, sweet and aniseed aroma due to the addition of honey and aniseed. It has an alcohol content of 6.6% vol.

Beer of low graduation, of smooth and light flavor, of own cloudy appearance of the beers Radler. Citrus and refreshing with an alcohol content of 2.6% vol.

SESSION INDIA PALE ALE style beer, with an intense golden colour and a powerful herbal and drupaceous aroma. Strong flavor and refreshing finish. Five varieties of hops are used for its production. Its alcoholic content is 4.5% vol.

La Sagra Pumpkin and Cinnamon is a red-orange beer. It has a dense and velvety body. Intense aroma, sweet and fruity, with soft notes of cinnamon and clove. It has a bitter taste at the end. Its alcohol content is 6.5% vol.

Lager style beer with a golden blond color, with fruity notes and a slightly bitter finish. The result is a refreshing beer that tastes like 100% barley malt. Its alcohol content is 5% vol.

It is a high alcohol beer with notes and aroma of caramel, coffee and apple, designed to accompany and enhance any dish, especially dessert. It has an alcoholic graduation of 10.4% vol.

Triple malt, extra storage and bottle conditioned. Intense blond color, floral and drupe aroma, fruity flavors of peach and apricot. Intense in the mouth but with a long swallow. It has an alcoholic graduation of 9.1% vol.

add a comment of Information about La Sagra Beer