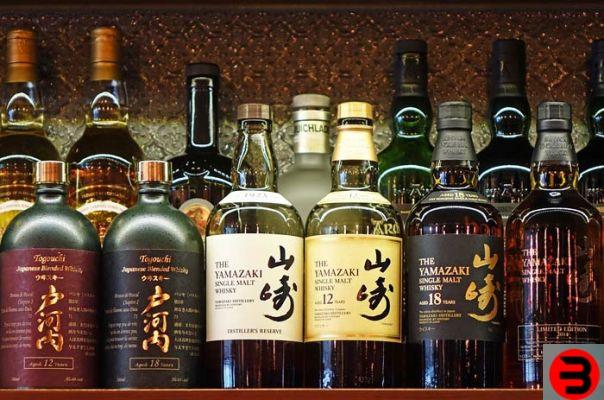 They learned from the best

In 1854, Commodore Matthew Calbraith Perr gave away a barrel with 414 liters of whiskey shogun Tokugawa Leyoshi under the Kanagawa Trade Treaty. The Japanese people were amazed by this "strange sake" from distant lands. Local producers, influenced and curious, have tried to reproduce its flavor without much luck.

After a long list of frustrating attempts, the company Settsu Shuzo was the first to make a serious effort to produce a local product worthy of being called Japanese whiskey. For this, they took Scotland as a reference for its long tradition and skill in both distillation and aging. It was there that they decided to send an apprentice .

The chosen one was Masataka Taketsuru , a young son of a long line of sake producers. Taketsuru studied organic chemistry at the University of Glasgow in 1919 and worked as an apprentice in various distilleries.

It started in Longmorn , (Highlands), passing through Bo'ness  (Lowlands) at James Calder & Co. and ended a Hazelburn (Campbeltown). In November 1920 he returned to Japan for good, where he began to develop all the knowledge acquired during his stay.

The search for one's own identity

Taketsuru returned, but the company that had hired him had gone bankrupt. It was still early days for the birth of Japanese whiskey.

Then it appeared Shijiro Torii , who, like Masataka, wanted to find the formula for making a local whiskey. Shinjiro, a sake and port wine merchant, had made a fortune by producing a local Western-style liqueur.

This encouraged him to join forces with Taketsuru. Together they opened what is considered to be the first Japanese whiskey distillery in Yamazaki.

The proximity to Kyôto and the quality of the water made the enclave the perfect place to produce a good product and market it easily. From this alliance the first Japanese whiskey was born: " Shirofuda ".

This was not received very successfully and caused estrangement between the two pioneers of Japanese whiskey. Shinjiro Torii was looking for a lighter and floral profile, possibly influenced by the western wines and spirits he distributed.

Conversely, Taketsuru preferred a product a little more robust Is that smoked, respecting what he learned from his stay in Scotland.

Shijiro continued his project in Yamazaki. Masataka, on the contrary, has decided to move to Yoichi , on the island of Hokkaido, where both water and weather conditions were more similar to Scotland.

The rivalry and discrepancies between Torii and Taketsuru were at the origin of what are now known as the two main Japanese whiskey companies, Suntory e Nikka.

Turn a defect into a virtue

In addition to their disagreements, Taketsuru and Shijiro faced a common problem. Both had their own distilleries (the only ones in the country), but they were unwilling to exchange spirits.

This was an apparently essential condition for achieving their purpose: to produce a good one mixture.

They solved the problem in a practical and ingenious way. They both began working with stills with necks of different lengths and inclinations.

This gave them the opportunity to get a great variety of profiles and shades of their whiskeys. This very innovative strategy has made them, almost without knowing it, true experts in still distillation.

After so many ups and downs it was still possible to overcome the last of the tests, the most demanding: the Japanese palate. Producers supplied a local market accustomed to good food and good drink.

The Japanese people therefore acted as a demanding critic and acted as a filter. Becoming a kind of market di test, gave the product a balance full of nuances.

Without knowing it, they had brewed Japanese whiskey to compete and surpass any other whiskey in the world, even Scotch, their main inspiration.

Once we have gone through history and seen its evolution, there is only one thing left to do: drink Japanese whiskey and know how to drink it well. Japanese whiskey is a great distillate to drink da solo o “on the rocks” , but we must not lose sight of the fact that the product is also designed for pairing like a good wine.


To all this we must add a characteristic trait shared by almost 40% of the Japanese population, which consists of a enzyme deficiency of alcoholic metabolism. This causes varying degrees of intolerance to it. All these circumstances led to the proposal to mix the product with water.

Il mizuwari, Japanese cocktail par excellence, is an example. It is prepared by mixing ⅓ of whiskey with ⅔ of water, but there are several variations by adding a touch of citrus, using rose water or orange blossom, or tea.

This cocktail is as simple as it is surprising. By lowering the alcoholic concentration and breaking the ethanol barrier, whiskey is able to express all its aromatic nuances and raise them to their maximum expression.

We have thus reached the end of the journey. Knowing these points, one can now enter the world of Japanese whiskey. A world full of nuances, balances and pleasant surprises with a culture where subtlety is one of its reasons for being.

Welcome to the world of the Japanese spirit, where its fans are divided into two groups: those who like it and those who haven't tried it yet.

What is the difference between bourbon and scotch?

Japanese whiskey: here's everything you need to know

Whiskey aging: where and how it takes place, types and time needed

add a comment of Understanding Japanese whiskey in 5 steps