Tequila and Mezcal: Characteristics and Differences of Mexican Spirits 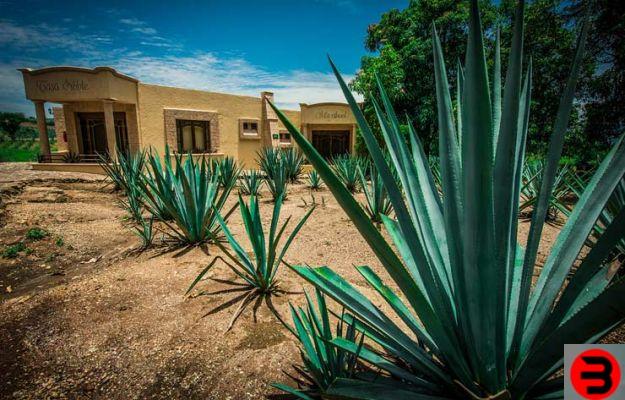 Tequila and Mezcal: Characteristics and Differences of Mexican Spirits

What we know as "The Tequila" actually it would be to call with masculine declension, or “Il Tequila”. It is a product distillate to Jalisco, a Mexican state overlooking the Pacific Ocean.

Here the real Tequila is produced by Weber's agave, or the blue one.

Il Mezcalinstead, it is produced with a variable variety of agave with a choice of over thirty different species.

Differences, analogies and stories of Mezcal and Tequila

What they have in common is the type of processing of the plant destined for distillation from which the heart is taken, which is obtained by a particular cut of the leaves.

The heart is called piña and is minced with charcoal at high temperatures to obtain fermentation. The difference lies in the composition for which nel Mezcal employment of agave al 100%, while in the Tequila one part up to 49% can consist of added sugar.

Sugar gives a very different flavor and you integrate it because the blue variety of agave has a particularly sour taste.

The Mezcal has very different characteristics and traditions compared to Tequila. The most used agave for production is Angustifolia which is generally less fragrant than the blue one and which has a decidedly more sugary flavor.

l Mezcal employs longer maturation times and has no geographical limits of production.

The processing, unlike the Tequila, takes place in pits dug in the ground for cooking the plants together with leaves, branches and resin. Cooking takes several days and is the most important phase.


From this they come extracted the sugars and released the juices which will be placed in wooden or steel tanks to start the fermentation. It can last from one to three days and takes place in two phases to reach the desired alcoholic threshold.

Il Mezcal if produced with mature agave plants distilled in stills discontinuous, with rests ranging from two months to seven years and which are used for coloring and finishing.

Aging gives rise to the denominations that for this distillate are three, that is Anejo, Reposado e Blanco. The first type ages one year and in barrels that must not exceed two hundred liters.

The Reposado matures from two to twelve months while the Blanco is lighter in color and matures for only two months. Mezcal is used in two very popular cocktails in Mexico.

The first is the Toro Loco which is made up of Mezcal and coffee liqueur while the other, the Mezcalibur, is a refreshing mix of Mezcal e succo d'ananas.

The traditions of Tequila production

Tequila is tasted for meditation or at the end of a meal, as the tradition of Mexican cuisine teaches where it is combined with stuffed tacos and spicy and spicy vegetables.

It can also be used for creation of numerous cocktails like The Margarita which lends itself to delicious summer aperitifs.

It is produced after having collected one large amount of agaves very ripe which will be cooked for over twenty-four hours and left to ferment to obtain the so-called Pulque.


It will come later distillate for obtaining Tequila to be bottled. It is tasted straight or with lemon and, depending on the type of aging, it is of the Blanco, Reposado, Gold or Añejo type.

The story of the Mezcal Worm

In addition, a worm called Gusano, a larva that lives in the agave and is eaten fried and salted. It is believed to have powerful aphrodisiac and hallucinogenic effects. The Gusano in the bottle is a traditional symbol of quality and purity of the distillate.

The tradition comes from a legend that sees the protagonist mythical dea del Mezcal, the forty thousand-breasted goddess with whom she is said to feed her beloved subjects. The goddess fell in love with a warrior attached to her breast due to a particular state of arousal due to I gave birth to a Worm in his heart.

Legend has it that the attentions of the goddess for this warrior they exhausted him to the point of make him pass out. She then attached it to hers best breast of Mezcal and this suddenly came to his senses.

However, this love could not be consummated due to the differences between an ordinary mortal and a goddess. Desperate, she gave the warrior the Gusano who was born in his heart.

The warrior ate it and turned into a deity finally giving himself to the goddess for seven days and seven nights.

The horrors of pre-Columbian civilizations

Tequila is much better known as a distillate and is characterized by a history that intertwines the Aztecs and the Spanish conquerors up to a certain date, in which the birth of the first Mexican distillery, in 1795. Tequila production originates in Jalisco from which the famous Agave Azzurra distillate is obtained.

It is said that the priests drank the fermented agave juice to enter one trance state with which to get to dialogue with God and to endure, without being nauseated, the bloody sacrifices typical of the religious services of pre-Columbian civilizations.

These sacrificed animals and prisoners to the gods by fulfilling massacres indescribable together with the alcoholic effect of fermented agave. This hallucinogenic juice was also administered to those destined for the fate of sacrifice.

In this way the prisoners came to their death dazed and unable to understand what was happening around them.

Tequila and Mezcal: why not confuse them

Each distillate is never the same as another but it's unique and distinguished not only by a particular recipe but also by a specific one mix of flavors, colors and smells so it is practically impossible to get confused.

The difference between Tequila and Mezcal, as we have seen, lies not only in history but also in the production, in the geographical area reference and also nel type of plant employed.

Both are now widely used distillates for the preparation of cocktails and aperitifs although the most suitable way to understand their soul is to drink them as the Mexican tradition dictates, that is smooth and embellished with lemon.

The 5 strongest alcoholic cocktails to prepare at home

The 3 Best Cocktails with Absinthe

add a comment of Tequila and Mezcal: Characteristics and Differences of Mexican Spirits