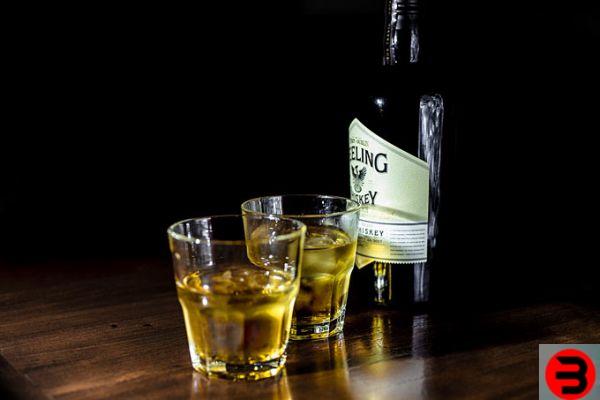 It is not just a question of etiquette

As mentioned earlier e differences between Whiskey and Whiskey they go far beyond what is stated on the label or country of production.

There are certainly the influences organoleptic characteristics, practices and geographical regions of whiskey production that characterize the flavors.

It is generally believed that the Scottish distillate is definitely more robust and peaty and the Irish one be gentle and more flavored with cereals.

The reason is due to Irish malts, traditionally more balanced than the Scottish ones which however do not retain the distinctive features of the land of origin as happens for the intense, bulky and peaty Scots.

Technical differences between Whiskey and Whiskey

Another substantial difference lies in the distillation methods which for whiskey is double while for whiskey it is triple.

The result of a double distillation is more intense than the Irish one and is due to the fact that it is not used unmalted barley for which additional distillation is required.

Scotch whiskey, on the other hand, is made from barley malt and, therefore, two distillations are sufficient.

Finally drying of the malt it follows different proceedings between Scotland and Ireland.

In practice in Scotland this is dried in powered ovens with peat and for which the cereals are flavored when they come into contact with smoke.

This is why Scotch whiskeys all have a smoky and brackish scent while the Irish ones keep the aromas of malt and honey, resulting more balanced and docile on the palate.

Finally, on a technical level, continuous stills are used for Scottish distillations while in Ireland discontinuous ones are used.

Aging and other competitors

Finally, what determines the differences between whiskey and whiskey it is aging that determines a sort of territorial link recognizable to the most prepared palates on the subject.

Both spirits are aged in oak barrels but the Irish one matures from three to seven years while the Scottish one has longer ripening times.

To these is added a third competitor which claims its importance on the world market, namely the American production.

So in order not to get confused and to clarify once and for all the differences between whiskey and whiskey we will briefly explain the peculiarities of each of the types.

Scotch whiskey is one of the most complex spirits in the world. It is prepared with pure barley malt indicated on the label with the initials "single malt".

The malting of the barley with which the sugars of the cereal are transformed involves a germination of the grain which is hydrated and then dried in ovens powered by peat, an organic compound that is created on seabed in the area where insects and decaying dead flora settle.

Peat is the salient feature of Scotch whiskey and it is what confers the particular brackish and smoky aroma.

Once the drying has taken place, the must is moved to ferment with yeasts that will transform the sugars into alcohol at about eight degrees, ready for distillation. This phase takes place with two-stroke stills.


The aging of whiskey takes place according to techniques of the distillery and therefore varies according to the type of flavored wood which is used for the barrels, previously used for other distillates that influence the aromas.

The law requires Scotch whiskey to age at least three years even if the optimal maturation times are much higher.

These spirits are also and above all characterized by thegeographical area of ​​production and the most important areas are the Island, lo Speyside e the Highlands.

Read also: Aromatic whiskeys that it makes sense to buy even if you are not an expert

The Irish and American Whiskey

Il Irish whiskey it follows, as we have seen, very different distillation processes and without the use of peat.

In fact, the malt used is obtained through a particular process that makes it sweet and scented or, as it is often described, round and balanced.

Unmalted barley is also used in the process, which requires a third distillation to lighten the bulkier flavor. The number of distillations is also influenced by the type of alembic used which, in Ireland, is generally larger.

There is also another variety of Whiskey which, however, has American origins. The most famous USA Whiskey is the Bourbon, the original distillate del Kentucky.

To produce it, mixed cereals are used including barley and corn and the aging lasts two years, during which the distillate is flavored with delicate and sweet flavors such as caramel or vanilla.

Another type is that made with rye, barley and oats like Tennessee.

Obviously the world of cereal distillates is much wider than this study but we are sure that you have understood at least the basics of the differences. of Whiskey and Whiskey and that you have acquired the fundamental knowledge to enter this fabulous world that welcomes new and faithful fans every day.

The 10 most spirits mixed with Coca Cola

Peaty whiskey: what it is, how it is produced and which are the best

add a comment of Difference between whiskey and whiskey: does it really exist?