At ForBeerLovers we want to give you all the information about beer Sol so that you can learn more about the history of this brand and why it is one of the most popular and consumed globally.

Information on the Sol Beer

Beer Sol is a Mexican beer from the Cervecería Cuauhtémoc Moctezuma group, with clear lager characteristics, not very bitter with an alcoholic content of 4.5° GL, developed in Mexico City by the extinct brewery El Salto del Agua

In ForBeerLovers we want to discover you all the information about beer so Sol you can know better the history of this brand and why it is one of the most popular and consumed worldwide. 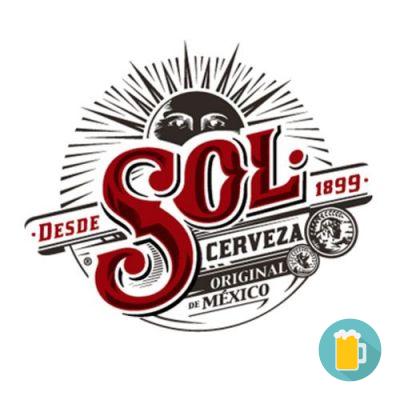 The beer Sol is presented as a quality brand within the reach of anyone and natural, which is why it is brewed with the following ingredients

If you want to know the nutritional contribution of the Model, here is a list of the most important values:

In 1912, Cervecería Moctezuma acquired "El Salto del Agua", thus giving the beer its name, and by 1924, "El Sol ", with its original design, was transformed into a beer Sol and began its expansion in the central zone of the country, becoming popular in states such as Estado de México, Morelos, Puebla, Tlaxcala, Hidalgo, Veracruz, Oaxaca, etc.


After the merger with Cervecería Cuauhtémoc Moctezuma, it Sol began a marketing campaign in 1980 to begin exporting to European countries, with the United Kingdom and Germany standing out for their acceptance of the brand.


With the intention of making it known not Sol only in Mexico, but in the rest of the world, in 1993 they began to spread

Wanting to renew themselves and present new products, in 2008 they presented to consumers the Sol Salt and Lemon Beer, and together with Grupo Peñafiel, in 2011 they presented Sol Clamato

Within the brand Sol , we find different ranges of beers that are adapted to a wider public. Below we discover the different types that are Sol currently on the market.

Mexico City Beer Sol is a Mexican beer from the Cervecería Cuauhtémoc Moctezuma group, with clear lager characteristics, not very bitter with an alcoholic content of 4.5° GL and 129 calories, developed in Mexico City by the extinct brewery El Salto del Agua.

Sol Limón y Sal is the first flavored beer in Mexico, based on the consumption habits of beer in the country. Made to satisfy the palates of those who enjoy the most intense, natural and refreshing flavors.